The New York Association for Pupil Transportation (NYAPT) today released the results of a survey taken on December 15, 2016, to measure the incidence of motorists illegally passing stopped school buses. And the results simply cannot be ignored by government leaders, the media and the public.

In the 35 school districts that participated in the survey that day, 765 school bus drivers reported they were passed a total of 678 times, including 101 passes on the passenger (or right) side of the school bus. That represents a marked increase in the number of right side passes reported.

At that rate of passing when applied to over 50,000 school buses in New York State, the total estimated illegal passing rate is 44,314 passes for that day. That same calculation would mean that, of that amount, 6,601 motorists would have passed school buses on the RIGHT side of the bus that day.

NYAPT President, Lori Ann Savino (Jericho Public Schools), noted that “This month’s rise in the level of ‘right side’ passes is a very serious concern to us. That right side of the school bus is used by our children to board and depart the school bus. They are moving supposedly within the protection of the bus. When a motorist comes up along the right side of the bus, they are creating a high risk situation and endangering the children. This trend is deeply upsetting to us and to every school bus driver in our state.”

NYAPT Executive Director, Peter Mannella, noted: “These numbers continue to rise and this year’s levels are higher than last year’s levels. We need parents and our school partners to help us to increase awareness of the rules of the road or we are going to face a tragedy. We call on the Governor, the state agencies and the state legislature to adopt this issue as a problem we must address together. It’s an easy message: STOP FOR THE SCHOOL BUS! It’s all for the safety of our children!”

The Cyr Foundation for Excellence in School Transportation is proud to announce the unveiling of a new educational program that will increase the awareness of and sensitivity of school bus drivers, attendants and monitors to gender-related issues on their school buses.

Designed for the Cyr Foundation by the Pupil Transportation Safety Institute (PTSI) of Syracuse, NY, and sponsored by the Utica National Insurance Group, the course will offer drivers and monitors with an understanding of the laws governing bullying and discrimination of students who are gay, lesbian, bi-sexual, transgendered or questioning their gender.

The program also explores the social trends in this arena in a way that applies to school bus management, and helps the attendees to develop their skills in creating a positive environment for all students who ride their school buses.

The program includes data about LGBTQ students, bullying trends and patterns, violence toward and personal injuries of these students and more. Importantly, it provides participants with practical approaches to gender-related bullying and an awareness of their roles as leaders and supporters on the school bus.

Gender-related bullying has increased in recent years and students who are victims of bullying have been known to avoid school entirely or the school bus ride specifically. The Cyr Foundation believes that it’s critical that drivers, attendants and monitors be provided with professionally valuable information on key social and educational trends. School bus drivers are the first personal contact that students have with their schools and they need to be prepared and ready to greet their riders and to be supportive of them so they are ‘ready to learn’ when the bus pulls into the schoolyard.

“We are so happy to bring this new program to school bus professionals in the state and proud that this effort will help each of them to create a safe place for all children who ride our yellow school buses,” noted JoAnn Martin, Tuxedo UFSD, and past president of the Foundation.

Cyr Foundation Executive Director, Peter Mannella, said that “school bus drivers and monitors are vital to the safety of our children and ensuring that they are prepared to address and support all students who ride their school bus is vital to their effectiveness in the drivers’ seat.”

The men and women who are responsible for the safe transportation of more than 2.3 million New York children to and from school each day take very seriously our mission of safety.

We are deeply saddened by the tragic loss of life in Chattanooga Tennessee and our hearts are with the Moms and Dads and families of those children who died in the accident on November 21, 2016. We extend our care and condolences to the schoolmates and school family at Woodmore Elementary School at this very difficult time.

The New York Association for Pupil Transportation wants to take a moment to re-assure parents in our state about the safety of the Yellow School Bus and our record of safe transportation here in New York. The yellow school bus is far and away the safest means for getting our children to and from school. National research data shows the school bus to be nearly eight times safer than any other form of transportation, including being driven in a parent’s vehicle.

Our school buses are manufactured with safety in mind. Each of our 50,000 school buses is inspected daily by drivers as well as technicians to ensure their road-worthiness. The buses meet exacting standards set out in the Federal Motor Vehicle Safety Standards. These are complemented by additional equipment requirements included in the state’s Vehicle and Traffic Law. Each of those school buses is also inspected twice annually by a State Transportation Department inspector and taken out of service if it does not meet specifications.

Our school bus drivers meet high standards and expectations and their training exceeds the federal standards that are set out by the federal government. Our drivers are randomly tested for drug and alcohol usage and are subjected to annual physicals and biennial physical performance tests that determine their capacity to carry out routine safety functions on the school bus. Drivers participate in a 30-hour basic course for school bus drivers as part of their qualification to drive the bus and must attend at least two 2-hour refresher training courses each year. Those courses contain information determined by the State Education Department. In addition, each driver is fingerprinted and undergoes a criminal background check to ensure that they are eligible to drive our children. Their driving record and such information is kept current in files maintained by school bus operators and audited regularly by the State Department of Motor Vehicles.

In New York State we are proud of the work and dedication of high quality school transportation professionals who oversee and manage operations, train drivers and attendants, establish safe routes and dispatch buses and drivers daily, maintain and repair the buses and inspect the buses and routes on a regular basis to ensure safety. We are also heartened by the dedication not only of those professionals but of our state agency partners who work side-by-side to improve and enrich our school bus safety measures and efforts.

The Chattanooga accident deeply affects every one of us and our hearts are heavy for all involved. Such an incident asks us to review every part of our operation and to look for ways to be even better.

We encourage parents to get to know their School Transportation team and learn more about what they do to ensure your child’s safety.

The New York Association for Pupil Transportation wants our children and their parents and families to know that and to feel assured of their safety each and every day.

Below please find the upcoming meetings and events of the 2016-2017 year. If you need this information in an alternate format, please contact us directly. Click on image for a PDF version to print. 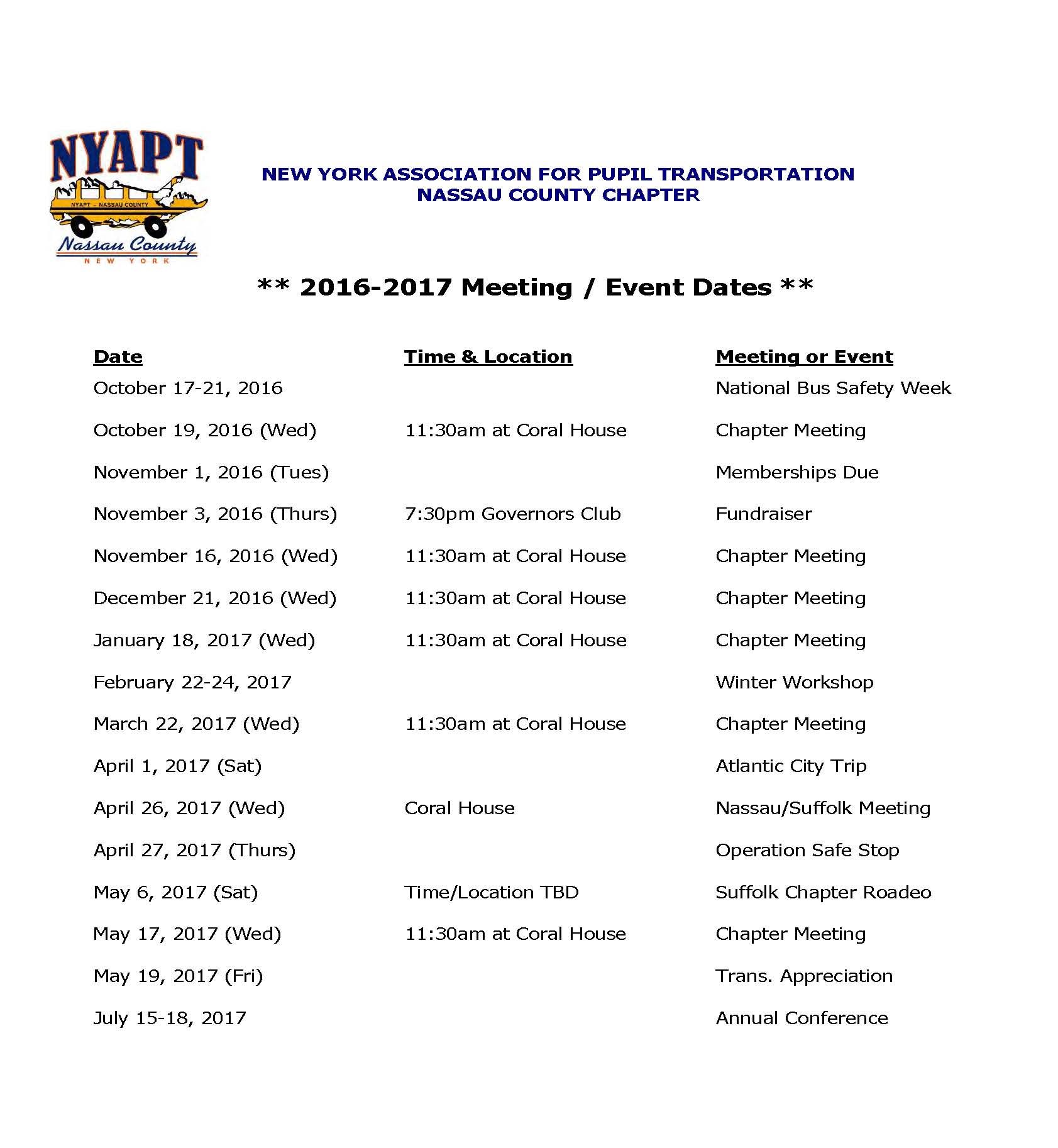 It’s that time of year when our children are returning to school, ready for a new school year, seeing their friends, and dreaming of becoming all they are supposed to be!

As the school year begins, the New York Association for Pupil Transportation wants all the Moms and Dads and families to know that those 2.3 million children will be riding aboard yellow school buses driven by qualified and well-trained school bus drivers in our state! We want them to know that their school buses will be well-equipped and maintained and offer the best safety technology and equipment available. And we want them to know that they will travel to school and back home each day on routes that are carefully planned for efficiency, but most importantly, for student safety.

“We are blessed with dedicated professionals in school transportation – including managers, dispatchers, mechanics, trainers, drivers and attendants – who are dedicated to the single mission of student safety in all we do. Students will arrive at school on buses operated by school districts, BOCES, private contractors, private schools and others, ready to learn. We are all united in one mission: student safety. We have a safety record that is second-to-none in New York State and we are deeply committed to continuing that safety for all 2.3 million children entrusted to our care,” noted Lori Ann Savino, NYAPT President and Transportation Supervisor for Jericho Public Schools.

NYAPT also wants to remind all motorists in New York State that the state’s Vehicle & Traffic Law requires all vehicles to come to a full stop when approaching a school bus that has its red lights flashing. Those lights indicate that a child is either boarding or departing the school bus. The law requires motorists to stop from all directions including on divided highways and multi-lane roads. Individuals who violate this law are subject to fines ranging from $250-$400 and five points on their license for a first conviction, with fines increasing for subsequent violations.

NYAPT estimates that some 50,000 motorists pass stopped school buses every day in New York. NYAPT Executive Director, Peter Mannella, notes that “50,000 illegal passes per day is simply unacceptable and presents a serious danger to our children. They trust us to stop and to keep them safe. They deserve our full attention to ensure their safety.”

There are over 50,000 yellow school buses operated by trained school bus drivers in all corners of New York State. School buses have a tremendous record of safety. Nationally recognized data demonstrate that school buses are some 50 times safer than any other form of transportation and that they are economically and environmentally efficient.

NYAPT wishes all students and their school bus drivers a successful and safe school year!